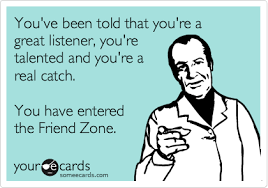 You meet a man, you date him for a while and you feel this connection that you want to grow into a committed monogamous relationship, He seems on the same page but when you ask about sealing the deal, or labeling your relationship, he hits you with this." We have a lot of fun, and you're a cool woman but....." Followed by some bull shit that's not what you what to hear right now. Don't make excuses for him or try to negotiate the why's and how's. Just accept that you have been friend zoned or reduced to a cool friend with benefits.

Now, if you are a woman who is expecting more, and looking for something with a more solid foundation and a label, this is your time to cut your losses early and move one, if you don't want to get hurt. Believe what he says, because it’s exactly what he means. The friend zone isn't always bad, in some cases relationships build from friendships, but this is more effective in a non sexual friend. Like most of our mothers used to say "Why buy the cow if you're getting it for free?" Also the friend zone happens to everyone at some point, so don't feel as if it is something you have done to get there.  Just understand that there is nothing you can do to change that he doesn't want a relationship with you. That's for him to figure out not you, so try your best not to internalize this.

There is a cause for concern if you continuously fall into the friends with benefits zone. Why are you only good enough for sex and not commitment? I would assume this is based on your actions as a woman (like I said, ASSUME, fall back please). You have somehow sent a message that that's all you require, and if that isn't the case then you have to reexamine your approach to dating. There are instances where having sex with no strings attached are ideal, but if you are actively dating and look for companionship, than this is not something to be okay with. Of course, I can't diagnosed what the issue is for every woman, but it's important to have these conversations with men early on, let them know exactly what your intentions are, and don't  have sex unless it seems you two are going in that direction. Also look at his actions, because honestly men will tell you anything. Is he attentive, does he call; does he remember things about you? Think about how you are when you are really into a man, and when you are not, do his actions mirror any one of these?

Ladies, just be clear about what you want, and don't want from the beginning of any dating situation and stick to it. There are many men in this world so, don't get stuck on one. I had a friend say to me last week "Every man I date it's greater and greater, could you imagine how dope 'The One' is going to be!" Greatest dating advice I've gotten in a long time, so, I’m passing it on to my Vixens. Date cautiously but keep an open mind, because that dope guy is out there.