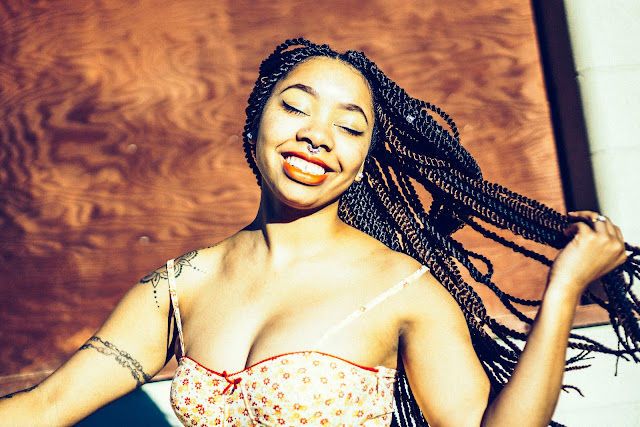 I originally posted in 2014, but my breast is still the topic of discussion, so this piece is still very relevant.


Love your curves, embrace your body and love yourself, are things I've been told my whole life, and I totally agree with it. Most of my life I've been the girl with huge boobs, I began developing my breast in 2nd grade at the age of 8, I did not know the journey would be filled with anguish and annoyance just for having these milk-making membranes. No one prepared me for the impact it would have on my life and everyone who looks at me. The mixed messages I would embark on as far as me embracing my body. Also, remaining "decent" based on other people's standards, has been the most annoying crossroad I've had to deal with since the age of eight years old.

The confusion started for me when I was a little girl. Adults would whisper or even say loudly, "watch out for her, her body is too grown" or would say things like, "those need to stop growing" or the one I hate the most "put those things away" making a little girl feel wrong about her body doing something that came naturally. As if I were asking for certain kinds of attention because my body is voluptuous. How am I supposed to learn to love and respect my body, when I continuously heard rhetoric that made me feel ashamed of it?

For the most part, I'm not a woman who shows cleavage all the time. Yet, let me add, it's not hard for me to have cleavage, I wear an F cup bra, even in a standard V neck shirt I'm going to have more cleavage than a woman with a B cup. I don't need to make an effort for that, my breasts are huge, cleavage happens on its own. Nonetheless, I made a choice to not show my breast a lot, I wear chunky necklaces usually to cover, or lessen cleavage, and I don't typically wear v-neck shirts, (I typically show leg more than anything) but it wasn't until I got older that I realized, I do these things to make other people feel comfortable, I'm fine with my breast, and their size and I love them, so why am I hiding something so other people don't feel awkward, so other people don't feel threatened or embarrassed by a big piece of my physical womanhood. It mostly has to do with people's reaction to them. You know how many great outfits I've worn and loved, or pictures I've posted on social media that I absolutely loved and people just simply reduced it to "look at those titties!!" and ruin something I'm obviously proud of because I'm showcasing it to the world, but they don't care. All their small minds see is breast. It's fucking annoying at this point, it's just big breast, grow up and get over it.

I've decided that I will no longer alter my appearance to make other people feel comfortable. I refuse to downplay my body, my beauty, and my femininity to be taken seriously. The same way everyone can objectify my breast, it's the same way I will force them to objectify my brains because if you know me personally that's way bigger than my breast anyway.

By Queen Twitter/Instagram @The QueenSpeaks_