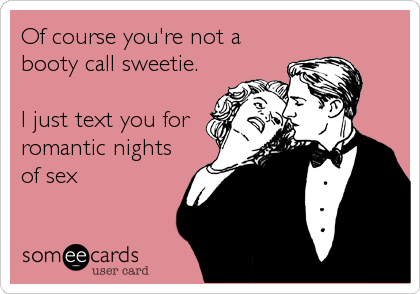 How do you know whether you're dating or just a mans sex buddy. Oddly many of us ladies have issues determining which situation we are currently in. Even doing things such as going on dates, and activities outside of the bedroom can leave you under the impression that you and your guy are dating and working your way into a relationship, which isn't always the case. I know plenty of women who have either been mislead or blindly believed they were working toward something with a man and were completely wrong. Here are a few ways to figure out if you're relationship with a man is more than just physical, or just a bedroom thing.

If you are mostly invited to his house, or he mostly just comes over your house. You're just stuck in the physical, and nothing more. Why aren't you outside together in public? When a person wants more they attempt to do more, everyone loves new experiences with a person they are into romantically.

He calls you mostly after the club closes, or worse, when the after hours spot closes. Don't feel special because someone thought of you while they were drunk!!! Does that make any sense to you? Drunk late night text or calls from someone you aren't in a relationship are typically about sex. Don't pick up, or reply to the text, let Marvin sit in that room alone. Well, unless thats all you want from him, if so, answer and make sure you have condoms.

Some men are clever, they may lead you to believe its more by placing these deterrents

If he's not using words like we, us, or our, you aren't important, you are just great vagina. Or using verb tenses that suggest future endeavors. Dating is the prerequisite for a relationship, you are learning each other. If he doesn't want to learn about you, or let you learn about him. Y'all are probably just sex buddies.

What are you saved in his phone as? Are you even saved in his phone? Call him and see what name comes up, if it's "big booty (insert name here)" or any sexually suggestive emoji....uhm yea y'all just boning. If your name with hearts comes up, just laugh it off act like you didn't see his screen and say it was a booty dial. You guys are closer on the scale to dating than the boning side.

He likes to disappear, he goes longs periods of time without contacting you, or worse, he only replies to you when it's convenient for him. That's never a good sign. A person who is into you is also available to you, so claims of busyness, depression, his dog is sick, etc. are typically lies, or exaggerated excuses. He's not that into you and the relationship is simple a sexual one.

Lastly, ask him! Don't assume what your situation is, ask him what he feels you guys are doing and see if you're on the same page. We are adults, never be afraid to ask questions to get real answers. Knowing your situation is the first step in knowing if you are going in the direction you want