My Beef With The Black on Black Crime Defense 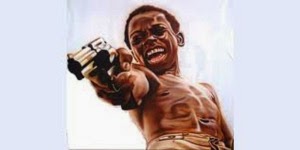 At first, I wanted to get to my computer right away and tell this story, but that feeling went away as quickly as it came. I knew this deserved quality, and time. No need to be the first blogger to write about this because this requires more than a quick headline for hits on a search engine. I was in my living room cooling down from my Saturday night and went on twitter and saw a woman I know who lives in St Louis tweet about a teenage boy, shot and killed by the police. Immediately my heart sank, and I said out loud as if someone could hear me "not again". Not again has a young man been killed by the police, not again was a unarmed black person murdered, and not again will my heart have to grieve for a person I don't know, but still, somehow feel connected to.

My first reaction was anger, and blame. I, like many people always need someone to blame when things they don't understand happen, and initially I blamed black people. I sent a text to a friend and said "I'm going to be annoyed because most people that will get angry  about these matters don't get angry when we kill each other, we don't even respect ourselves, why should the world".  I wanted to blame someone, and like most victims I internalized the issue. Instead of trying to figure out what is actually happening. Similar to how  a person who is raped does to themselves, instead of examining how, regardless of circumstances leading up to a rape, these actions aren't the crime, the rape is. Murder is the crime, not all these things that lead to the conditions. I have since removed that as my thought and blame no one but the people who shoot these people with no disregard for their life.

Black on Black crime does exist, but so does white on white crime. According to the Root.com most crimes  are committed among people of  the same race at the same rates. In the US. 84% of white people are murdered at the hands of  white people. Do they also have to learn to respect themselves in order to  for the world to respect them? Are these numbers used to point at issues within the white community? No they aren't, so why do we continuously use this as a platform to address us getting murdered by white vigilantes and law enforcement?  It's like we are brained washed to always blame ourselves for what others do to us. Do we have issues, and many things to work on as people, yes, but so does every race and culture. There's  no call for self reflection when a white man shoots up a movie theater, but I must question my condition in  America as a black person because I am angry when a white person victimizes me? That thinking is foolish, and you sound just as empty as  people who believe prostitutes can't be raped.

These modern public lynchings must stop, regardless of whether or not black people commit crimes among themselves. Mike Brown's body was left in the street for four hours. Similar to how  black people were lynched in the past, and left to hang visibly for days, to invoke fear in people. That's the feeling I get every time I saw a picture of Mike Brown, and every time I saw Trayvon Martin's lifeless  body on my television screen. These images further devalue the life of black people.  Black on black crime is focused on way more than other races, as a defense for injustice and i'm tired of it. This false sense of "well if we carried our selves better then. . . ." is bullshit. Martin Luther king was murdered wearing a suit, and preaching non-violence find another argument, because the one you're pedaling now is counter productive, uncle tom foolery.