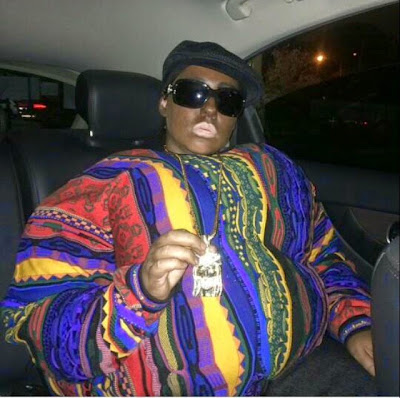 Halloween is this week and I'm pretty excited. I wasn't allowed to participate in Halloween as a child, growing up in a Muslim home, Halloween wasn't an option. I would often stay home from school and we'd put a sign on our apartment door that said no candy, and go on with our October 31st like it was a normal day. I was fine with it, you don't particular miss things you've never experienced, and I was pretty used to that ritual not being a part of my life. As I grew older participated in Halloween twice, and both times were fun, so I've decided to do so this year.

I'm  sure Halloween is still a fun time for many adults, but the past few years due to social media I notice that many people use Halloween as an excuse to be assholes. I have always been turned off by a lot of cultural appropriation that takes place during Halloween. I never have a agreed with it, to wear someones cultural garb or likeness for play just is insulting. Who wants their culture to be  a joke or entertainment, especially if you're from  a minority group, I go further into the problems with appropriation in my Katy Perry article .  Yet, these past few years I have seen many costumes  that are racist and sexist. Black face is at an all time high, and many white people think is fine and retort with comments like "But black people do white face" which anyone who actually knows the history of black face would know there's no comparison. It was a form of entertainment widely popular to make fun of the Black people. Very popular in the United states, in which white actors would wear shoe polish on their face, make their lips pink and large to exaggerate the features of a Black person and to maliciously mock the likeness of a Black person. It's exhausting having to explain that Black face is offensive, and maybe i'll write a stand alone piece on the history of Black face and why it's offensive. I've digressed a little bit from the point of my post, so let me get back to that.

Last year I saw many costumes of white people dressed as Black entertainers, and many felt the need to paint themselves to  appear as a Black person which is very unnecessary. I have seen many black girls dressed as Cinderella and they haven't painted their faces white, yet we still know what character they're portraying. There's no need for the paint. Here are a few costumes of white people being black entertainers done correctly .


Then there are the costumes that are disgusting, and incredibly insensitive that I am sure are simply for shock value, and are done incredible bad taste. Last year the costume that made my jaw drop was one mocking Trayvon Martin. Trayvon Martin was a teenage unarmed Black boy who was murdered by George Zimmerman simply for being black in an all white neighborhood. The case stirred lots of controversy and brought up a lot of racial tension. I really couldn't wrap my mind around why anyone would think that was funny. This year the Ray Rice incident seem to be the go to asshole costume of the year. Ray Rice was fired from his NFL team after a video surfaced of him knocking out his wife (she was his girlfriend at the time of the video) in an elevator. This incident stirred a lot of controversy yet this Halloween people seemed to think it was a joke. I had no idea domestic violence was a joke, and could ever be something anyone thought was a great idea for a Halloween costume.

What most of these racist and insensitive costumes have in common is, they lack accountability and resposibility. Many of the pepople who participate hide under the notion that this is simply hallowen fun, and it's not. They haven't explored the underlying damage they are causing by participating in these activities, and it's because they usually are too lazy to research the informamotion or simply don't care. It's is easy to explore and challenge boundaries that are taboo to cross if you don't have or need to be held accountable for your actions. Let's challenge ourselves to be adults and not use Halloween as an excuse to be detrimentally offensive, to other people. Lets bring it back to candy, pumpkin carving and the occasional prank, those are things I think we all can handle.