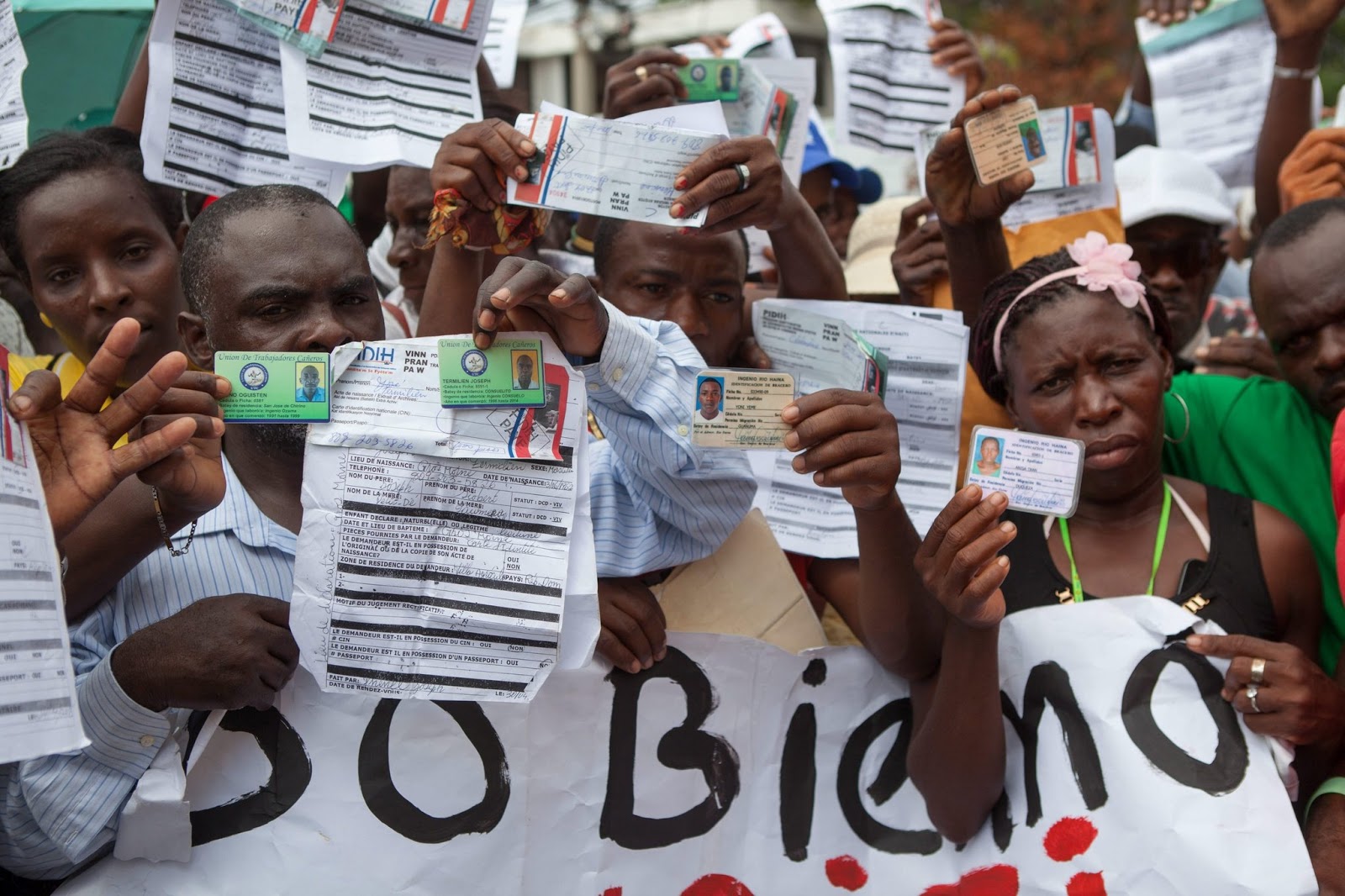 The Dominican Republic may deport up to 100,000 Dominicans of Haitian descent in three days reports the nation. This is ethnic cleansing, which many calling "social cleansing"

To sum up what is currently happening in the Dominican Republic, and the ethnic cleansing that has been brewing in that country for years now in  few bullet  points won't suffice. These are issues that are deeply rooted in classism, colonialism, white supremacy a many other underlying ism that exist everywhere in the world. These aren't stories flooding headlines so I  understand peoples lack of awareness of  most of these type of social political acts are problematic.

I did find an  article on RYOT.org website that  does give a great break down of the current racial and cultural dismay currently taking place in the Dominican Republic, I urge all Ms. Vixen's readers to share this, and seek more information, we must first be aware in order to change the world.

1. The DR government has revoked the citizenship of more than 100,000 Dominicans born in the country of Haitian parents.
If the Dominican Republic proceeds with its deportation plan, the Dominican-Haitians will be rendered stateless.
According to Dominican Today, DR President Danilo Medina delivered a speech in February reminding foreign nations and international bodies that they cannot require the DR to compromise its legal order or constitution in relation to migration or other sovereign rights.

2. Many of the Dominican-born Haitians facing the looming threat of deportation have never visited Haiti or know anyone there.
Despite DR media outlets continuing to refer to Dominicans of Haitian descent simply as “Haitians,” many of them have no connection whatsoever to the country. So technically, the Dominican Republic is not expelling immigrants from its borders but rather people who were born and raised there.
Many of the potential deportees own a business and work in the DR.
Though the number of Dominican-Haitians in the Dominican Republic is most often cited to be over 100,000, that estimate is likely low. Harper’s reported the number to be more around 210,000, though 500,000 has been floating around also.
It’s doubtful Haiti will be able to handle a massive influx of refugees; it doesn’t have the resources.

3. The criteria the government will use in deciding who is to be bussed out of the country is “dark-skinned Dominicans with Haitian facial features.”
In February, Dominican-Haitian Henry Claude Jean, described as a “humble shoe shine worker,” was found murdered in a Santiago public park, hanging by his neck with his hands and feet bound.
The police refused to acknowledge the motive for the killing was most likely racism and instead said the violence was related to a robbery, reported The Huffington Post.
Historically, the DR has demonstrated a tendency to scapegoat Haitians for crime, and the lynching was the latest manifestation of that trend.
Around the same time, Dominican Rep. Ydanis Rodriguez of New York City was marching against police violence and the killing of Eric Garner, but failed to even acknowledge the plight of Haitians in the DR.
“We want him to recognize that black lives matter in the Dominican Republic as well and end his silence on anti-Haitian violence and the denationalization of Dominicans of Haitian descent,” said Miriam Neptune, a Haitian-Americans who is a member of the New York City activist group We
Are All Dominican.

4. The DR government claims to have established a legalization process for Dominican-Haitians wishing to remain in the country, but the system is close-to-impossible, according to sources on the ground.
Dominicans of Haitian descent can attempt to “regularize” their citizenship status by visiting one of the reportedly overcrowded and understaffed offices the government has set up. But paperwork, paperwork that many Dominican-Haitians don’t have, is required to take advantage of the process.
Many of these DR residents of Haitian heritage weren’t issued birth certificates because they were born in rural towns under the care of midwives, not hospitals.
“I am documenting dozens of personal accounts from Dominican-Haitians who have gone to great lengths to register, some as much as 8-9 months ago, and as of (June 12) have not received any type of confirmation that their paperwork has even been processed,” and aid worker, who wishes to remain anonymous, told The Nation.

5. Even though currently the deportation of Dominic-Haitians persists as only a possibility, all evidence points to it happening.
Dominican television media reported on June 9 that the DR government requested from transportation companies that up to 36 large passenger buses be made available for continued use, according to the aid worker.
“This is an extremely ominous sign,” he said. “Everything is set for the deportation and that the DR government is saying it is going forth on this Tuesday, June 16.”
Ignoring the fact that forcing people out of their own country is a human rights violation in itself, Jose Ricardo Taveras, the country’s former director of immigration, said in an August 2014 speech that the deportation process would be carried out with dignity and respect for human rights.
“Initially, the foreign citizens who are in the country, will be invited to leave voluntarily,” he said. “Secondly, if they do not leave voluntarily, through various mechanisms established by law, they will be returned to their country of origin.”