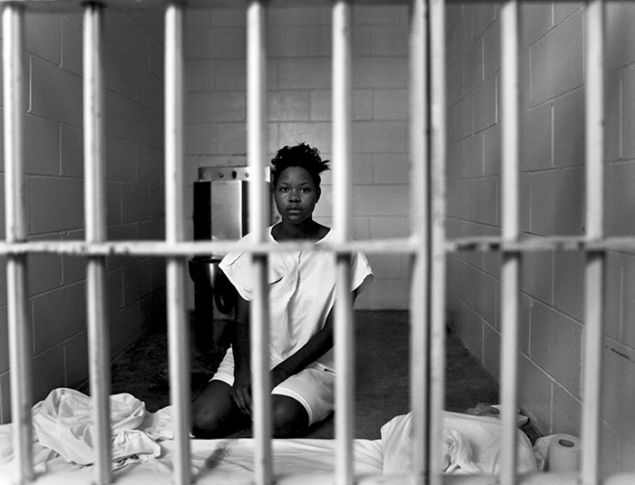 Everyone laughed when Piper Champan emerged from the shower during the first season of Orange Is the New Black with bootleg shoes made of maxi pads – and inmates do sometimes waste precious resources like sanitary products with off-label uses. At York Correctional Institution in Niantic, Connecticut, where I spent more than six years, I used the tampons as scouring pads – certainly not as sponges, because prison tampons are essentially waterproof– when I needed to clean a stubborn mess in my cell.

That should not lead anyone to think that sanitary products are easy to come by in jail. At York, each cell, which houses two female inmates, receives five pads per week to split. I'm not sure what they expect us to do with the fifth but this comes out to 10 total for each woman, allowing for only one change a day in an average five-day monthly cycle. The lack of sanitary supplies is so bad in women’s prisons that I have seen pads fly right out of an inmate’s pants: prison maxi pads don’t have wings and they have only average adhesive so, when a woman wears the same pad for several days because she can’t find a fresh one, that pad often fails to stick to her underwear and the pad falls out. It’s disgusting but it’s true.

The only reason I dodged having a maxi pad slither off my leg is that I layered and quilted together about six at a time so I could wear a homemade diaper that was too big to slide down my pants. I had enough supplies to do so because I bought my pads from the commissary. However, approximately 80% of inmates are indigent and cannot afford to pay the $2.63 the maxi pads cost per package of 24, as most earn 75 cents a day and need to buy other necessities like toothpaste ($1.50, or two days’ pay) and deodorant ($1.93, almost three days’ pay). Sometimes I couldn’t get the pads because the commissary ran out: they kept them in short supply as it appeared I was the only one buying them. Read More