Choosing a treatment for mental health concerns is a very personal decision. Whatever you choose to do or not do should be thought out carefully and researched before you embark on your journey. However, one treatment method that I have consistently seen misrepresented and subject to fear mongering by people who either have no experience with it or who have had bad experiences with it is the use of psychotropic drugs. As a result of an irresponsible US pharmaceutical industry, the ability to both create and find a growing number of conspiracy theories and false information via the internet, the proliferation of negative experiences, and ignoring the lived experiences and testimonies of those who they have helped, psych meds have gotten a bad rap.

Despite my own, often painful and frustrating, journey with psych meds I still don’t count them out as a beneficial and effective form of treatment for many, many people because I understand my own anecdotal experience doesn’t trump data or other people’s experiences. Due to the enzymes, my body produces I cannot properly process most psychotropic medications and have experienced some awful, sometimes rare and life-threatening, side effects. I didn’t find this out until much later in life after having felt like a guinea pig since my adolescence. However, I don’t fault most of my psychiatrists for their determination to find something that could help me using trial and error because the genetic testing, known as pharmacogenetics, was not available until very recently. It is, however, costly and not always covered by insurance. I hope with growing access to pharmacogenetic testing that psychiatry will become less hit or miss because that is a huge factor in why psych meds have such a bad reputation.
A big contributing factor to the vilification of psych meds, particularly in the US, is the justified distrust of the pharmaceutical industry. Medicine should not be a profit-driven industry, but in America it is. This has led the way to medications and treatments for various conditions being approved well before the appropriate level of testing could be done, incentivizing doctors to prescribe medications that have limited research available about them, marketing of pharmaceuticals through reps who have no actual medical background or extensive understanding of the medications they are pushing, advertising complex medicines directly to consumers much like sugary cereals are advertised to children in a bid to get them to demand them, and a gaggle of other concerns. However, even with all of the issues regarding “big pharma” numerous treatments that they have developed and put on the market are overwhelmingly safe and effective.

Deadhead the Flowers of Your Dreams

Even with the bad PR around pharmaceutical companies, I believe that one of the biggest reasons the disdain for psych meds has grown over the years is because of the experimental nature of prescription. Although people can and do also have negative and sometimes debilitating side effects from medications for other physical illnesses, the stigma around mental illness and the fact that the brain is the most complicated and least understood organ of the human body amplifies the distrust around psych meds. There are countless forums related to psych meds and their side effects with many people urging others to not just stay away from a particular medication, but to forgo medication as a treatment option altogether because of their own experiences. It would be different if the forums were used as a place to ask if others experienced the same side effects, ask what they did to cope with them, or just be an all-around supportive environment, but that is not always the case. Too often I see people respond to questions about medications with anger and anecdotal or false information, sometimes going as far as to shame people for choosing to take medication. This is not just dangerous, but ableist as well. There are also those with good intentions but terrible wording like the below exchange on Twitter: 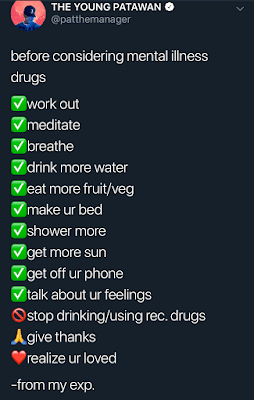 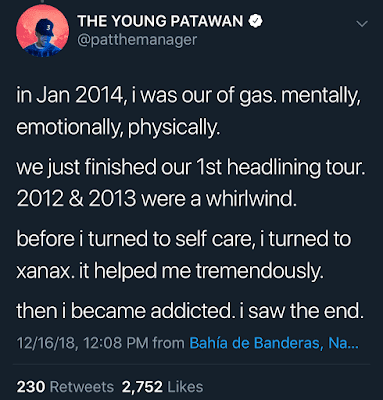 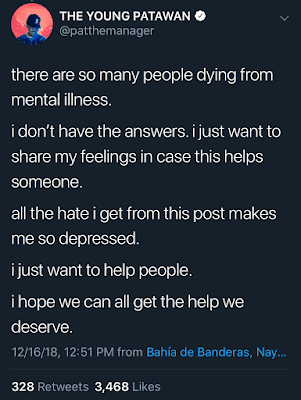 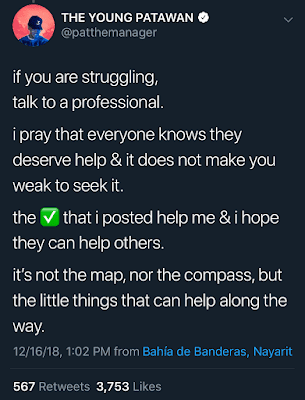 I could very well have turned out to be one of those people, but I understand that each person responds to both medications and what can be considered innocuous things differently. It’s why some people will end up hospitalized from penicillin and others live’s will be saved. It’s why I can eat all the strawberries I want but someone else may go into anaphylactic shock. Acknowledging that we all don’t, and won’t, respond to treatments in the exact same way is extremely important to me. It’s why I always add the qualifier “for me” or some variation of that when speaking about treatments that have and have not worked in my experience.
I would never try to dissuade anyone from starting medication or pressure them to come off of medication. My approach is to empower people to talk openly and honestly, as well as advocate for themselves when it comes to discussing medication options with their doctors. Even when I’m told about side effects and a person expresses they can’t handle them, I would never tell someone to stop cold turkey, but to consult with their doctors immediately on how to safely stop or mitigate side effects. As well versed as I am in mental health as a consumer, student, and former provider I am not a doctor and I don’t pretend to be.
Psychiatric meds should be treated by the public like any other medication used to treat a physical illness. Just because mental illness affects the brain that doesn’t make it any less of a physical illness, and it doesn’t make the need for medical treatment any less necessary. As someone who has worked to advocate for people with mental illnesses and as someone who has a mental illness, one of the biggest hurdles regarding treatment and supports is that it is treated as a monolithic set of conditions. Even those who have nothing but the best of intentions, who are deemed qualified to create programs and educational material to improve the quality of life of those with mental health concerns and destigmatize mental illness fall into these trappings. Imagine treating all forms of cancer with the same treatment regimen and the poor outcomes that would produce. Yet, we continue to see this when it comes to discussions around mental illness. We have to get away from this way of thinking or we will continue to scare people out of getting the help they need and can benefit from.