It’s really hard looking at you fuckers who are content to let the world burn because you think you’re fireproof.

I am legit sitting here struggling to arrange my thoughts around the sheer number of goofy motherfuckers who think that being anti-abortion is moral. To think that denying any person who could potentially be pregnant any choice about that is somehow humane is fucking mind-boggling to me. I was born after Roe vs Wade. I grew up knowing that if I didn’t want to be pregnant for any reason, I had the option. I have spoken out and financially supported organizations intent on providing that option because it’s a fucking medical procedure that your corrupt, bottom-feeding asses have made into a ridiculous moral issue. ALL for something that you not only couldn’t but wouldn’t be able to save should it expel itself out of a body. You’d be grossed out cuz it’s not a fucking person. And to lie and tell yourselves that it could be is some high form white people fuckery. Cuz y’all don’t give one flying fuck about too many living people, often citing the same morality guiding your hand on abortion.

Want more real stories written by folks like you?


It’s almost like you have something to gain from oppressing the rights of others. It’s almost like you benefit someway when other people are trapped, desperate, hurting, and fighting to survive. Like it makes us easier to distract and control or some shit.

Black people who are anti-abortion confuse the fuck out of me considering the ways our bodies are manipulated and controlled by media, police, employers, etc. How can anyone with our history deny body autonomy to anyone else? Black men who support this confuse me and Black womxn who co-sign on this shit confuse me even more. Like, WTF? How do you prioritize unwanted health risks and possible potential life over people who are right here, trying to figure shit out and live the best they can? How can you willfully decide not just to limit their opportunities based on some shady moral shit, but then support punishment for it?

White womxn are just trash. Y’all loud and wrong, quiet and wrong, defensive and wrong, offensive and wrong…y’ all stay backing white men thinking they are going to protect you when every fucking time you only make yourselves more vulnerable to them. You support them building weapons against you because you think it will protect whiteness when really it just exploits you. And you don’t give a fuck. You can’t. You keep birthing, enabling, and protecting these fucking monsters only to be confused when the monsters attack you.

We have civilly both-sided our way into continued stolen elections and the intentional destruction of civil rights, and white people still don’t think it’s a fucking problem. The only possible conclusion I can reach as I watch this shit is this: You don’t want to save yourselves – you want to save whiteness. And whiteness is white supremacist, ableist, sizeist, patriarchal capitalism – something too many of you has decided to die for since you seek to deny women medical care.

I’ve been pro-abortion all my life. If you don’t want to be pregnant, you shouldn’t have to be. For years, I fell into the rhetoric trap, parsing out the ways it should be acceptable under the misguided notion that I could find a compromise, but there is no compromise on human rights. There is no compromise on body autonomy. There is no compromise on my decision to have a medical procedure when I knew I did not want to be a parent. I have always been aware of the limits that parenthood would place on my life as our society punishes women for having children. Pregnancy and its “positive” outcome are a direct line to increased economic and social oppression and exploitation and I decided to opt-out. It’s only marginally accepted in this society to choose not to have kids, but it has never been openly acceptable to have an abortion, despite the many women, married and single, who have them and don’t talk about it.

Abortion was one of the things that I vocally supported and refused to admit to doing. I decided that my decision wasn’t available for public consumption, because the voice coming from this fat, Black, femme body doesn’t fucking matter when it comes to legislation, patriarchy, and white fuckery. All I’d be doing is providing yet another reason for people to attack and dismiss me. Another way to put my economic stability at risk. Another way to be ostracized and scorned. I have more than enough of those so why add another, when it would add nothing to the conversation?

And my talking about it now won’t matter because human rights are a debate for white people. White people created “white people” specifically to deny other human rights. It’s easier to elevate one over another than one over many, which explains limiting people to two genders, male and female, and why white people see racial identity as white and other. White males get the power. Others do not.

White womxn refuse to see their “other” status. They think being white erases that and there is nothing anyone can say to make them realize that because for them, it’s not about whether or not they are in the crosshairs…it’s that they are the last ones to be in the crosshairs. We are playing a game called “who dies first” and in the gender wars, it’s anyone who isn’t a man. This thing where we sacrifice others on the altar of white supremacist, ableist, sizeist, patriarchal capitalism for the illusion of safety erodes our fucking humanity. It erodes our communities. It destroys everything and everyone so that white people can pretend they are the best humans on a planet they murder.

Black and Indigenous people have been saying stop for centuries. Live to co-exist with the environment. But white supremacy dictates that we abuse the environment. Exploit it. Consume its resources and pollute it. “Other” people are fodder for their vision of power and this shit is evident in every fucking way, but too many of us pretend it’s a conspiracy so that we can figure out who it is acceptable to destroy in our bids for power.

I am one of the more acceptable ones to crush in that bid for power for many people. It is a reality I struggle to manage, especially when I am one of many voices screaming at the top of my lungs at how this is destroying all of us. But I am a fat, Black womxn. My voice is untrustworthy. My truth is unverified. And my experiences are my overactive imagination. Because white people create any and every reason to avoid the truth and spit out every teaspoon of the bitter reality that they have written the recipe for. And I will not survive to see their inevitable downfall. I will not get to see them burn in the ramifications of their selfish decisions. I will die, probably sooner than later, knowing that everything will continue falling to shit for the masses as swaths of the masses choose to protect whiteness and its elites. All because white people want to feel good about the illusion that they are more important than anyone else. And they will destroy anyone who contradicts that. Especially for people like me.

There is no change coming because the people who could do it, don’t see the benefit in it. So, we’ll keep trying to survive the monsters they continue to create and protect while everything burns around us. Why change where there are billions who will probably burn before you will? 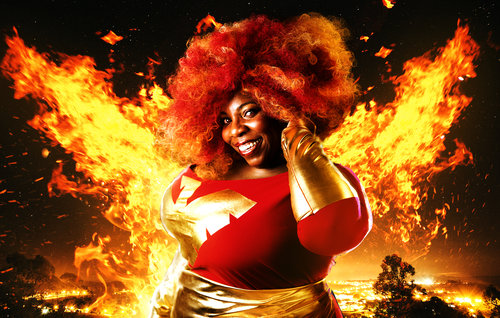 Photograph By Geek Behind The Lens Photography
Written By: Talyn Kel